There’s been a lot of coverage in the news lately about the dramatic increase in hospitalisations amongst baby boomers, due to alcohol dependency – a trend that is counter to all other age-groups in society, we’re told. The cause of this spike is something to do with the boomers’ adolescent experiences of alcohol back in the 60s and 70s.

a drink for every occasion

Back then, drinking alcohol was an adult pastime that was universally participated in and accompanied almost all social as well as many formal occasions. Drinking alcohol was for a large proportion of the population the only social activity they ever did. Drinking alcohol was therefore a right of passage in many adolescents’ lives and for these baby-boomers, me included, the anticipation of that first proper drink was momentous. There certainly wasn’t any fear or warning about the dangers of alcohol dependency.

I came across an article recently by a baby boomer who said that when she went to University in the 1970s her family warned her about the perils of “pot”, not alcohol. She was told to stay away from dope and stick to cider; the presumption being that cider would bring no harm, while marijuana would lead to heroin addiction.

Stick to cider and you’ll be fine! Really?

Cider was “of course” harmless; unless you drunk too much of it, in which case you had a problem. But to acquire alcohol dependency takes a long time, and if you start with the premise that cider and beer are harmless, then you have a lot of time to play with before anyone, including yourself, notices that there is a problem. It’s not surprising then that 40 years ago, problem drinking went unchecked, that dangerous habits were forged in broad daylight.

Alcohol was associated with ceremonies of all kinds (it still is to an extent) including religious ones – the “blood” of Christ – and its place in 1970s culture went absolutely unchallenged. If anyone drank too much, that was due to their own weakness, not society’s – and very much their own business.

In the 70s people were less inclined to point the finger at other people’s habits anyway. I remember the big fuss made about the infringement to personal liberty brought about by motorcyclists’ compulsory wearing of safety helmets. The Liberal Party was dead against it. So, you can imagine what people would have made of interfering with other people’s drinking habits.  It was no one else’s business but yours when you had a drink. The idea of printing the Government Health Inspector’s recommended number of weekly units on the side of a bottle of beer, wine, or spirits would have caused outrage.

I don’t think the 70s attitude was particularly laissez-faire or bohemian either. Pubs were closed for most of the day and alcohol wasn’t available in anything like the number of places it is now – like petrol stations and cafes 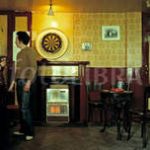 But that’s not in any way to diminish alcohol’s central role in adult life. Pubs were literally everywhere, and when they were open, they were full. Alcohol was consumed at every occasion of  any note. Alcohol was one of those facts of life that were too interwoven into the fabric of society to be isolated and challenged – like obesity, unsaturated fat, sugar, tobacco, lack of exercise, food-additives, pollution, amongst others. Where would you start, even if you wanted to?

I’m not suggesting that everyone suffered from alcohol dependency back in the 60s and 70s, but everyone was exposed to alcohol at all occasions back then, and participation on at least some level was expected. To be t total back then was as “suspicious” as being vegetarian, Muslim, black, homosexual. If it wasn’t exactly wrong, it certainly wasn’t “normal”.

Excluded from the club

I think my life was on hold up until the time I was allowed to drink. That’s how it feels. I longed for the day when I could go to the pub, or pour myself a glass of whisky, or open a bottle of wine. I vividly remember all those alcohol adverts, 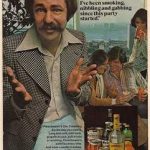 the cocktails and champagne in films, the smell of stale beer on train carriages where football and rugby fans had been.

At 15, alcohol, at last, was allowed to become my primary interest in life. And it remained that way for 36 years, until 5 years ago I realised I had had enough of it and wanted something new and different. 5 years on, I am happy to say, there is still a novelty in being free from the burden of worry about alcohol (drinking too much of it; not having enough of it, spending too much money on it, hiding it…) There is also the joy of discovering new things about myself; the things I like doing and not doing; where my priorities lie in relation to family, work-life-balance, free time, holidays. Alcohol clouded my judgement of these things, because it was more important to me than anything else, even if I wasn’t prepared to admit it at the time.

And the world seems to have moved on a bit now too; not that I noticed it while I was drinking. People aren’t so bothered about alcohol as they were. Pubs are shutting in their droves. Young people seem to be far more interested in food than alcohol these days. Sure, they binge drink (which is a problem, I know) but alcohol doesn’t have the mystique it once had. There are so many more activities to occupy kids in 21st century Britain – like mobile phones, social media, computer games, limitless TV.

Alcohol dependency is still alive and kicking, but it’s no surprise to me that the biggest group of dependents are the baby boomers.